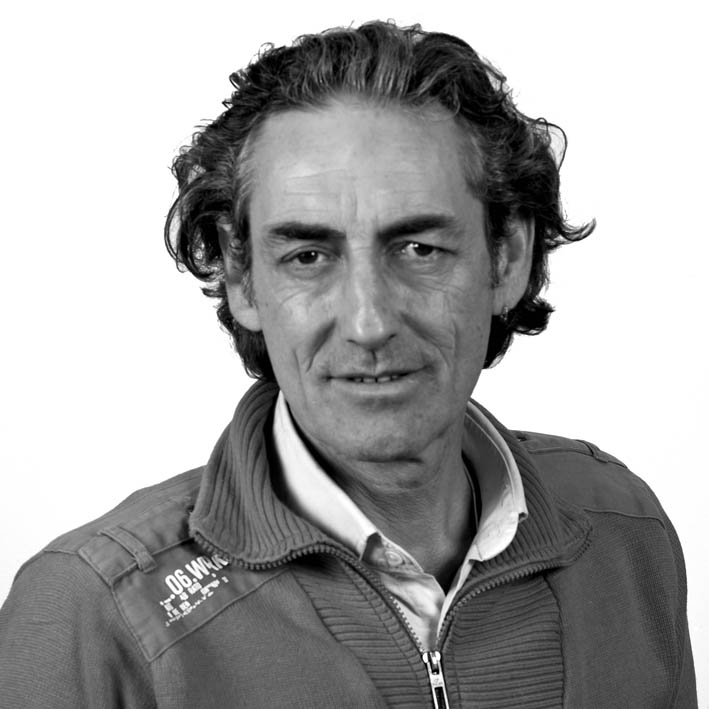 Laurent Ouisse was born in Nantes (France) in 1963. Independent photographer since the 90’s,
he develop his work in the field of art and culture and in a close co-operation with artist, actors,
dancers, performers, producers, stage designer and street theater compagny like « Royal de Luxe ».
He publish with Actes-Sud in Le Grand Répertoire - Machines de Spectacle de François Delarozière.
In 2010 he won the 2d Prix du Public at the Festival International de l’Image Environnementale (FIIE) Paris
with a serie about Delhi and Mumbai. In 2015, he contribute at Moving Images Pondy Art in Pondicherry
in India. Liking an inspired « Street Photography » witch is all movement, he publish in 2015 Delhi & Mumbai,
the first monograph of his work about the Indian subcontinent.


PHOTOGRAPHER, born (1963) in Nantes ; settled back there in 1992.
« The first cathedrals I saw were freighters, in Donges, on the Loire estuary. As a boy, I really could not see where the earth, starting
from St Nazaire or Nantes, could end. Il rather seemed to whirl round and round, and in my young mind, I saw it as making little of
distances and time, and océans, and nationalities. It looked friendly enough, open and terribly exciting. It is only natural that Nantes,
where I was born, should have become again my home port. »
If you ask him where he learned photography, Laurent Ouisse will answer : « At the Louvres, watching the great paintings of the Masters.»
At first, he was intimidated by the wealth of masterpieces in the history of photography too and chose not to look at it straight in the eye.
He made a detour, admiring another panorama, that took him back all the same to the great names of photography, to a little slot which
he made his own, because it is just like him. He gladly veers into poetry and philosophy. But of his technical schooling in Tours and Paris,
he says little. He is always looking towards other horizons. First and foremost : museums. And travel – at the age of nineteen : Greece.
Then Africa, before returning to Nantes : the famous routes if international trade. What counted even more were the studios of painters
and sculptors. Not to mention video directors, musicians and actors. He is always visiting the site of one project or the other. Where
creativity is and where elsewhere is : that is where Laurent Ouisse finds the fluid at the heart of the photographic process, the autonomous
current to which today he allows a free reign, close to what he is looking for, to what he captures randomly in the world : something that
is aside or elsewhere - to be begged, stolen or borrowed here. Experience is a word he likes using. Laurent Ouisse is not into clichés.
He roams about and takes notes in the ideal note-book that photography is for him. His work belongs to the great travel diary tradition,
his photographs are rimes that he chimes out on the way, just like Rimbaud, that other unrepentant advocate of truthful living.
What Laurent sees is somewhere in between an idea and an icon.
Dominique Landais (Translated by Bernard Turle)